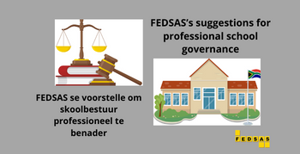 There is more to school legislation than language and admissions policy. And although these aspects are crucial, discussions on other amendments and shortcomings are also required.

“School legislation is an instrument used to give stature to public education. The entire instrument should be conducive to quality education. A school governing body’s duties do not differ much from those of a company board or similar management body. Legislation should guide the entire spectrum of school governance to create space for a governing body to manage everything from financial aspects and human resources to policy on language and admissions,” says Dr. Jaco Deacon, CEO of FEDSAS. FEDSAS has already commented extensively on the proposed amendments to language and admissions policy.

However, Deacon says there are also other amendments and shortcomings to consider. “Some of these might appear to be smaller technical amendments but for someone with a solid understanding of school governance it would be immediately clear what the impact of such amendments, or lack thereof, would be.”

One such aspect is how a school’s capacity is determined. “The actual implication is the number of learners in a classroom. The bigger picture is that there are still far too few schools in some areas of the country, especially schools that offer quality education. Parents and guardians obviously want to enroll their children in good schools, and these are not always the closest schools.”

FEDSAS is of the opinion that clear guidelines on the determination of a school’s capacity is lacking in the current amendments. “Objective criteria are needed. FEDSAS has already compiled a proposal with such guidelines. We should also use this opportunity to implement the lessons learned from the pandemic. FEDSAS proposes that alternative modes of education be made available, including hybrid models. This could be a solution to the capacity problem and would enable schools in densely populated areas to accommodate more learners.”

Another proposal that would benefit a model of cooperative governance is the inclusion of a stipulation on formal national and provincial consultative fora for national and provincial governing body organisations. Deacon says FEDSAS was instrumental in establishing the National Consultative Forum, which has been meeting with the National Department of Basic Education on a quarterly basis for more than 20 years. “It is important that a similar forum, also on the provincial level, becomes a legal requirement. This will provide governing bodies with a platform for interaction with provincial departments as well as the Minister of Basic Education. The amendment bill is the perfect opportunity to include such a stipulation.”

Standardized financial management for schools is a necessity but is dependent on proper legal stipulations. “Currently other pieces of legislation, including the Public Financial Management Act as well as Treasury regulations, are forced upon schools even though these do not apply to schools. And provincial guidelines are riddled with irregularities to the extent that is not clear whether provincial departments really have the expertise to fulfill such a function. For example, one province actually requires that withdrawal of petty cash be made by a deposit into an educator’s private bank account.”