Keep context in mind when interpreting report on corruption in education, caution FEDSAS and SAOU 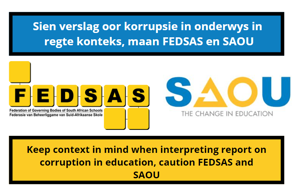 On face value, the Corruption Watch report on corruption in education in South Africa presents disturbing information but it has some limitations that should be considered when interpreting this information.

The Federation of Governing Bodies of South African Schools (FEDSAS) and the South Africa Teachers’ Union (SAOU) say in a combined media release that corruption is a big problem in education, as in many other public sectors. “We agree that good, honest and transparent governance is necessary in order to provide quality education to each child in the country,” according to Dr. Jaco Deacon, CEO of FEDSAS, and Mr. Chris Klopper, CEO of the SAOU.

However, one area where the report is lacking is in the interpretation of the information. “The report refers to incidents that were reported. There is therefore no factual basis for the conclusion. This leaves us with sensational reporting without accountability, and all principals and governing bodies are now lumped together,” says Deacon. Klopper agrees. “Reported incidents are not convictions. The report refers to more than 3600 incidents of corruption at public schools. What is not clearly indicated is that these incidents were reported over a period of 11 years. If we consider that there are about 23 000 public schools in South Africa, it amounts to an average of 327 reported incidents per year, or 1.4% of schools.”

Deacon and Klopper say the challenge is to convert reported incidents into charges, to provide evidence and to go through formal disciplinary and legal processes. “Schools and departments have to make it simpler to report misconduct and to protect whistle-blowers,” says Deacon.

FEDSAS and the SAOU both support all actions to fight corruption in the school system. “It is important that an organisation such as Corruption Watch highlights shortcomings and misconduct. Corruption Watch now has the responsibility to hand this information to the authorities so that formal processes can get underway.”

FEDSAS and the SAOU will continue to focus on presenting various programmes and initiatives to equip governing bodies and teachers with knowledge of good governance.