Proposed amendments to education laws must be to the advantage of all children, says FEDSAS 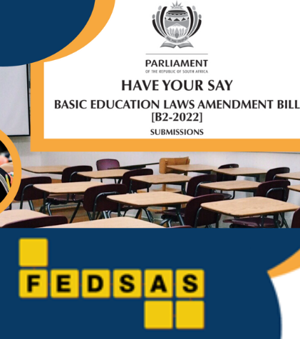 All children in South Africa are entitled to quality education yet most children still do not have access to it. Any comments on the proposed amendments to education laws must therefore be done with one goal in mind: will it improve the quality of education? The public has until 15 June to comment on the proposed amendments to the Schools’ Act as well as the Employment of Educators Act.

“Amendments to legislation are not strange; in fact, it is important that legislation keep up with the changes in society. The South African Schools’ Act has been amended nine times, with the last amendment more than a decade ago in 2011,” says Dr. Jaco Deacon, CEO of FEDSAS (the Federation of Governing Bodies of South African Schools). Substantial commentary on these amendments has been made since the process started in 2017. Deacon says FEDSAS appreciates that voices from the broader society are also being heard, especially organisations in the Afrikaans community that have voiced concern about proposed changes to language and admission policy. “It is important that all groups voice their opinion about and make constructive contributions to education since it is such a vital element of society.”

FEDSAS represents a wide range of school governing bodies, from top schools to schools facing many challenges. “Our members are representative of the entire spectrum of our society. Since the proposed amendments are applicable to all public schools FEDSAS’ approach to comments is that it should focus on the improvement of quality education in all these schools.” FEDSAS has provided its members with a summary of the proposed amendments, as well as the implications thereof for governing bodies. A webinar on the topic was presented and members were also informed on how to comment on the proposed amendments. Deacon says in terms of public participation unique comments are more important than for example a petition with signatures. “We want each school to reflect on how these changes might affect the functioning of the school, whether positive or negative.”

FEDSAS used three tests in determining its reaction to the proposed amendments. “We wanted to know which amendments will be an improvement on the current system, which of the stipulations would not make a positive contribution, and where are gaps.” Deacon says the core of the proposed amendments was determined in 2017. “The lessons learned the past two years during the pandemic could therefore not be considered. To keep up with change, the amendments should for example take into account our new way of work as well as aspects around online education and online meetings.”

Some of the proposed amendments that are a cause for concern for FEDSAS include a requirement that governing body members have to declare their own as well as immediate family members’ financial interests. “This might result in experts thinking twice before volunteering for an SGB. Not even members of parliament are required to do this! If the goal is to avoid a conflict of interest then the current version of the Schools’ Act already makes provision for handling such matters.”